On the example of the work of two largest nuclear power plants in Ukraine – Zaporizhzhya NPP (ZNPP) and South Ukraine NPP (SUNPP) – the issues of the radiation impact of nuclear power plants on the environment during long-term normal operational conditions are considered.
The sources and main results of such impact are considered, in particular: the dynamics of changes in the gamma-radiation dose rate at the industrial sites of SUNPP for 34 years of observations (1983–2017) and ZNPP for the period from 1984 to 2012; distribution of the total annual parameters of radioactive emissions in an atmosphere and radioactive discharges into the external water bodies of both NPPs for years of operation; dynamics of variations in the average volumetric activity of 137Cs and 90Sr radionuclides in atmospheric air at the NPP industrial sites during the analyzed periods; variations in the average annual values of the total beta-activity of atmospheric precipitation at the industrial sites of SUNPP for the period from 1983 to 2017 and for the ZNPP from 1985 to 2012.
Results of observation are compared to the similar data received before putting into operation each NPP.
The analysis showed that the values of the average annual dose rate of gamma-radiation remains virtually unchanged, and even at the industrial sites of SUNPP and ZNPP basically do not exceed the dose rate values measured before the first unit of each station was put into operation. The exceptions are the events associated with the events at the Chornobyl NPP in 1986 and the next post-Chornobyl years.
During the observation period, the values of the indicator of radioactive emissions into the atmosphere of SUNPP were at the level of 0.12÷1.24 %, and ZNPP — 0.11÷2.37 % of acceptable values, which corresponds to the level of normal operation.
Long-term observations of the specific concentrations of 137Cs and 90Sr in the surface layer of atmospheric air near nuclear power plants show a tendency to decrease from year to year (without taking into account the contribution from the Chornobyl nuclear power plant). This is explained by the fact that observations record not only cesium and strontium coming from nuclear power plants, but also cesium and strontium of global origin, against which the sensitivity of the instruments does not allow to isolate radionuclides released into the atmosphere from operating NPPs. Tests of nuclear weapons in the atmosphere, conducted in the world before 1980, led to the entry into the stratosphere of a large number of long-lived man-made radionuclides and their further fall to the earth’s surface for many years. The observed decrease in the specific concentration of 137Cs and 90Sr in the surface layer of the atmosphere is associated with the depletion of its reserves in the stratosphere.
At the same time, the values of volumetric activity of 137Cs and 90Sr in the air at the industrial sites of SUNPP and ZNPP are much lower than permissible.
The average annual values of the total beta activity of atmospheric precipitation at the industrial sites of SUNPP and ZNPP are practically at the same level. That is, the observed radioactive fallout from the atmospheric air is mainly due to global deposition and only to a small extent by nuclear power plant emissions.
Based on the analysis it was concluded that the work of SUNPP and ZNPP practically does not affect the radiation situation near the stations.

3. South Ukrainian NPP. Unit No. 3. Periodic reassessment safety report. Factor no. 14. Impact of the operation of the NPP on the environment. Ministry of Energy and Coal Mining of Ukraine, State Scientific Engineering Center of Control System and Emergency Response, Kyiv, 2019, 158 p. (in Russ.)

5. Radiation situation around the South-Ukrainian NPP in the prelaunch period (measurement of zero background). Report of the INR of the Academy of Sciences of the Ukrainian SSR, IBF, Ministry of Health of the USSR, Nikolaev OblSES, Kyiv, 1980. (in Russ.)

6. Radiation situation in the Zaporizhzhya NPP location prior to its commissioning. Report of the IBF of the USSR Ministry of Health, Moscow, 1983. (in Russ.)

9. RG.0.0026.0159. Permissible gas-aerosol release and permissible water discharges of radioactive substances into the environment of SE «South-Ukrainian NPP» (radiation and hygiene regulations of the first group). Introduced by order of 02.01.2018, no. 13, 11 p. (in Russ.)

13. SE “Zaporizhzhya NPP”. Report on the periodic reassessment of the safety of power units no. 1.2 SE ZNPP. Safety Factor no. 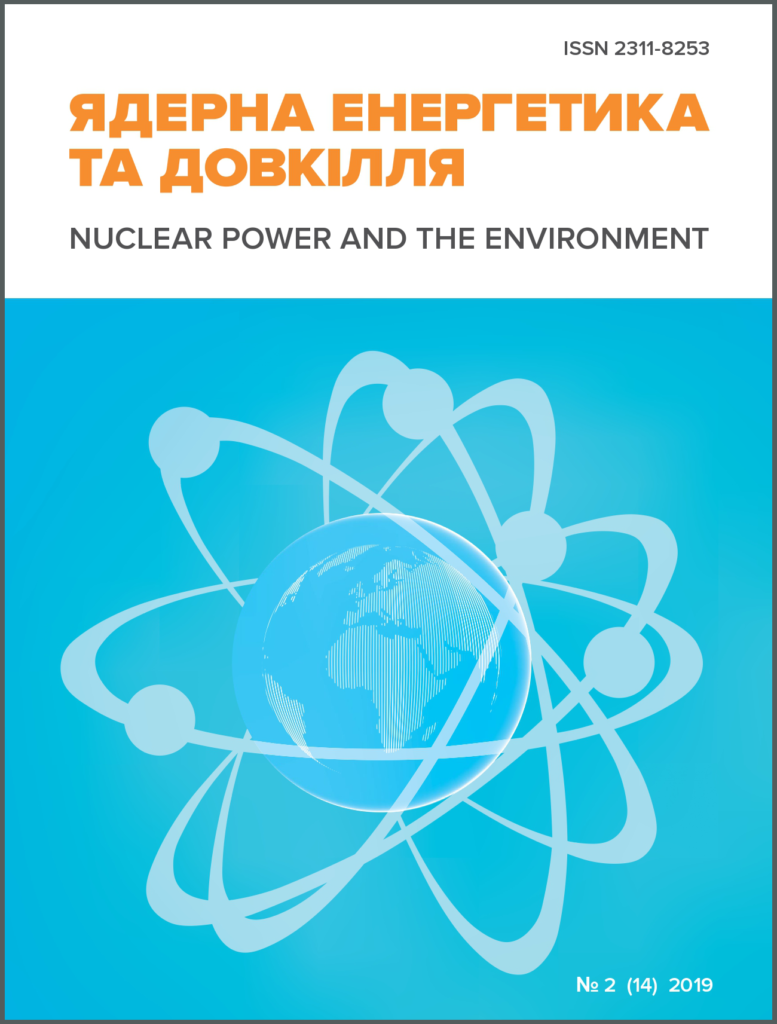